Welcome to "Lovecraft's Untold Stories." A top down, 8 bit survival horror shooter which dives deep into H.P. Lovecraft's rich Cult of Cthulhu mythology. (Or is it?)

I must say, within about 10 minutes of playing this game, and exploring the opening mansion that you have access to, I was immediately taken aback by just how exploration rich the game is. It's full of neat little surprises and traps hidden behind lore written riddles for you to make important choices and avoid being hurt to whatever extent. 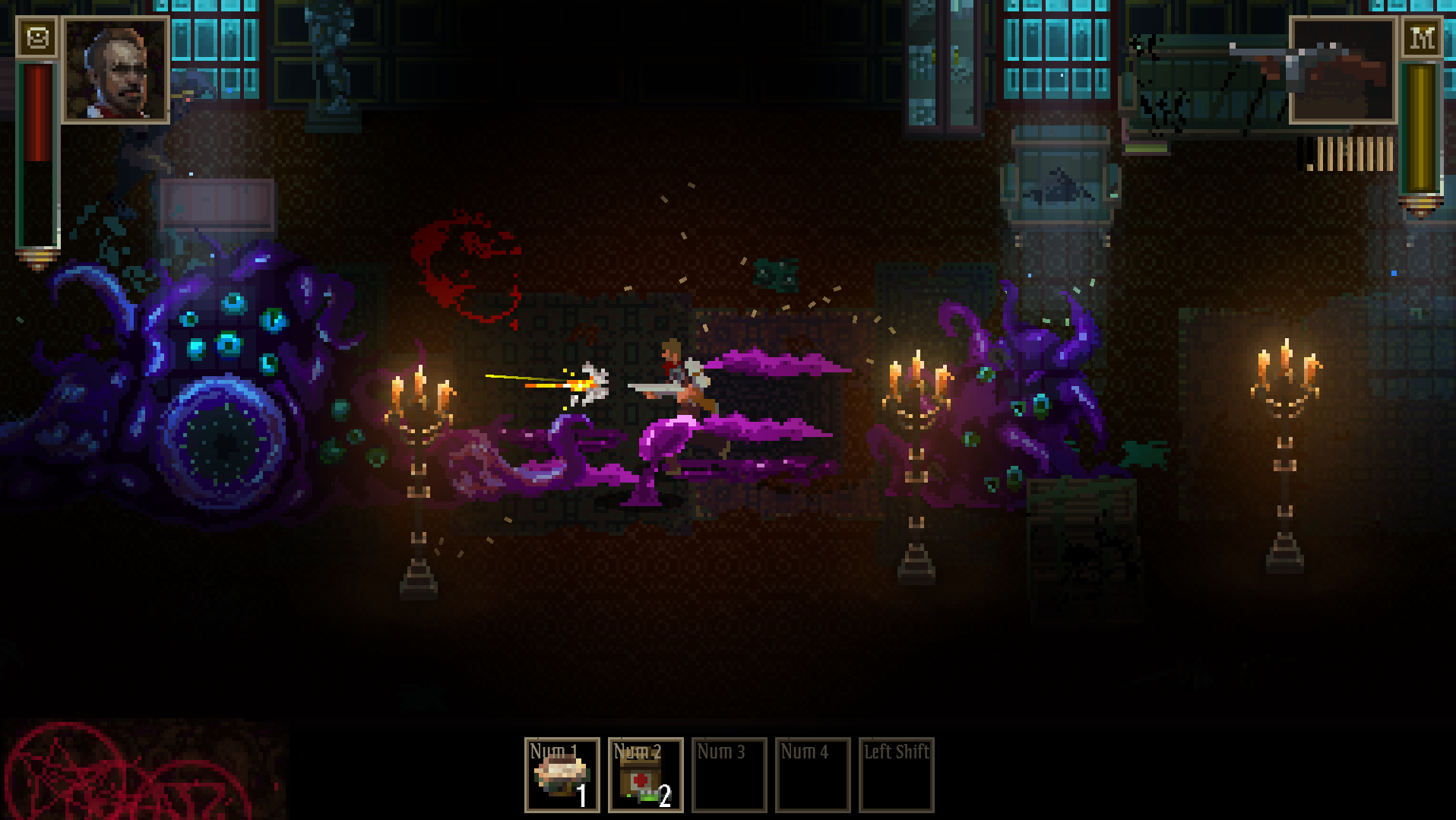 When you start the game, you're given the choice between an Easy, Normal, and Hard mode experience. For the sake of this article, I went ahead and chose the Normal setting, as opposed to going balls to the wall with Hard mode. Normal Mode: For novice story collectors who have played similar games and who would like to prevent the Great Old Ones from winning despite all their horrors. Don't let the incredible and eerie soundtrack get to you, now!

After selecting your difficulty, you're taken to a screen which allows you to select a character. You have five different characters to choose from, however; only one remains unlocked at this time. Detective John Murphy; a Private Eye from the New Orleans Police Department. He's a tough guy, and keeps a close eye on facts and targets. This is but a paraphrase of the description you'll receive upon selecting the character. (Don't want to give away too much before you try the game!) 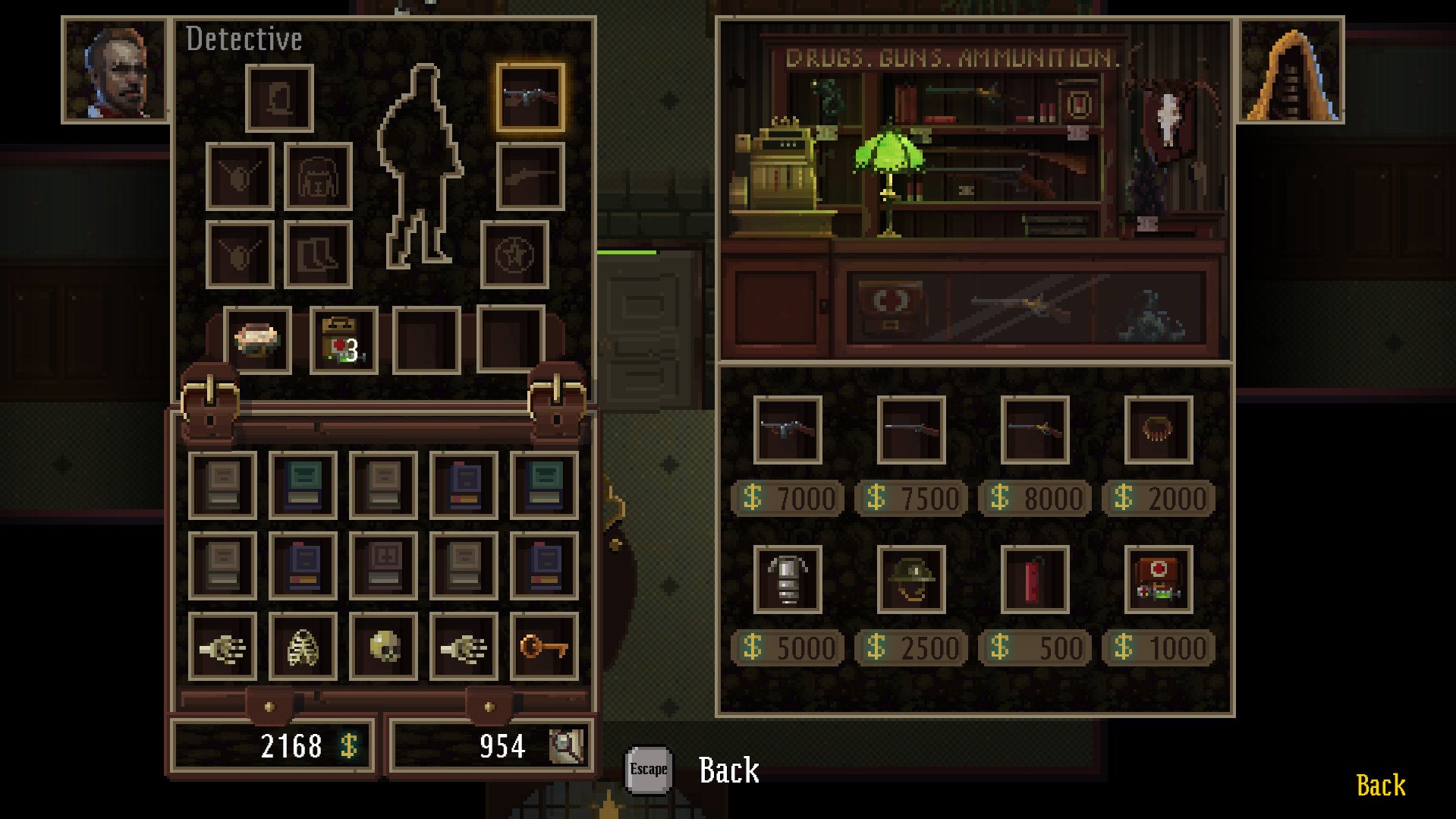 So the game starts with you receiving a distraught telegram begging you to bring a gun and stop the Bayou Cult. Cthulhu never sleeps, apparently. The controls are pretty straightforward, as well. WASD for your movement, mouse for your aiming, left click to fire, etc... You get the picture. (You can choose to use the directional arrows on your keyboard for movement if you'd like, or even use a gamepad. I opted for Mouse and Keyboard.) For an 8bit Title, the game plays remarkably well, keeping a very steady frame rate of 60+, it's as smooth as butter.

As you explore the mansion, you'll come across information regarding the cult, various items for you to hold on to, such as health items, keys, antidote for poison, and dynamite. There are a few things you need to watch out for. As you explore, you'll come across certain things that you can "examine." Depending on what it is, will be up to you to further inspect and take the risk of losing "Sanity." That's right, looks like we get a bit of Amnesia in here! I love this, as it really makes you read what's going on, so you don't wind up mindlessly clicking just to get through everything. Lose enough sanity, and it's game over for you. This can also be reverted during the game by finding a way to see peace in whatever it is that you're examining. Think you're losing too much sanity? Find peace and regain sanity. This game really makes you decide how you perceive things. 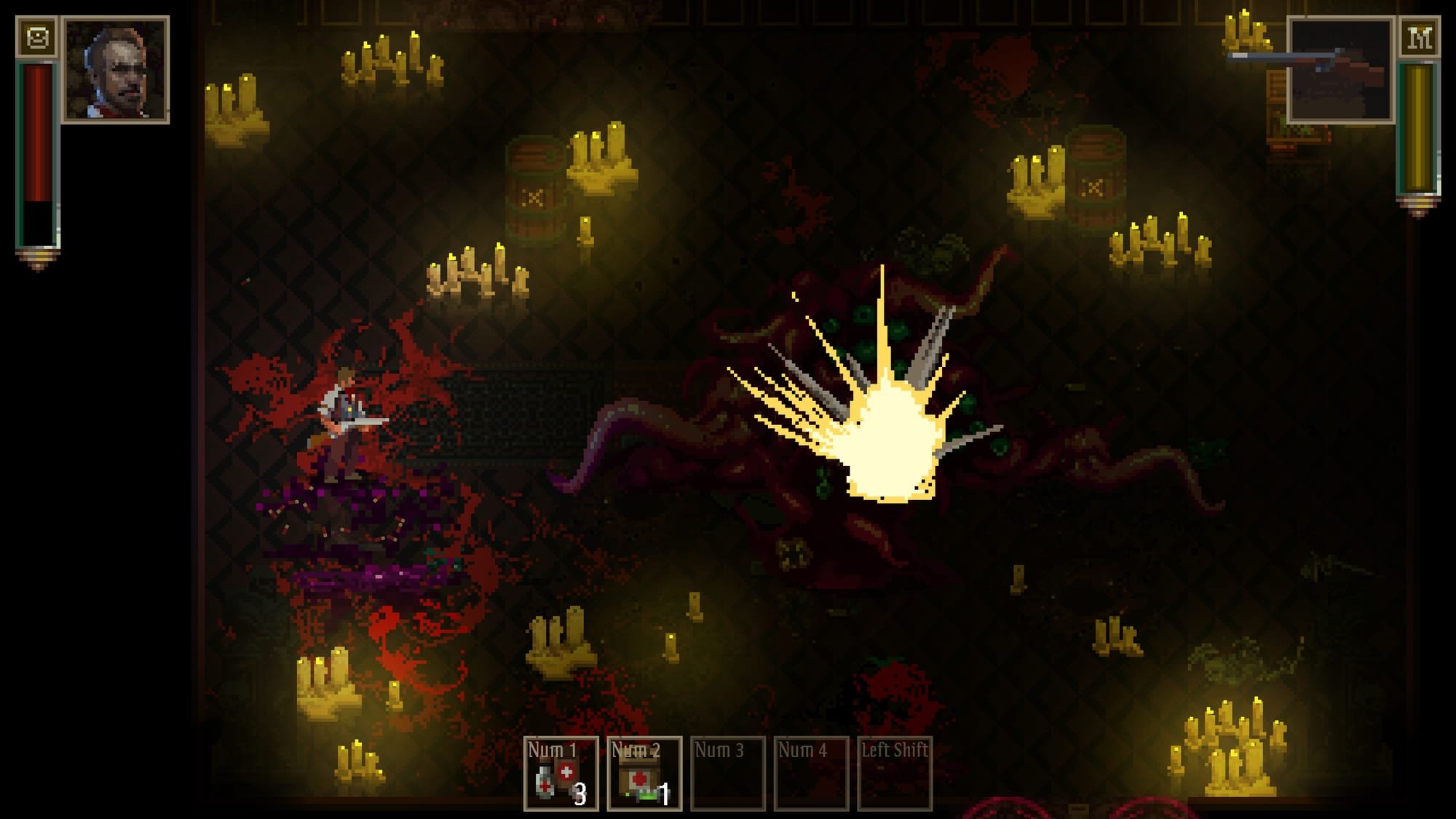 You'll want to keep an eye out for traps, as well. Hit a certain trap, and you'll end up bleeding to death. This can be cured, however; by finding the appropriate medical items. Your cultists that roam different rooms can usually be taken down with a simple shotgun blast, but they're not something you want to play around with. Take them down as quickly as you can, and you might end up surviving and solving the great mystery!

Other than that, there's really not much else to say without spoiling anything! It's a great game, that has a great atmosphere, great game play, and a really nice and eerie soundtrack. I give Lovecraft's Untold Stories a 9 out of 10, and it's one that you should definitely pick up. It's available on Steam right now for $14.99. You won't regret it!